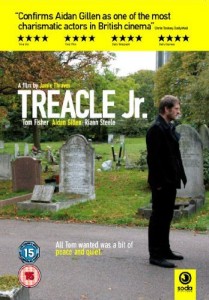 I pondered the idea of doing a full review of this movie instead of a quick one like I usually do. Why? Because it made my heart beat stronger as I watched it last night and I’d like to give it a little push; it really deserves it. It’s a small budget movie that went almost straight to DVD; some festivals, some prizes but no international release. I’m not even sure the movie will be available on DVD in other countries someday. And that’s sad. Treacle Jr. is not meant to be a blockbuster but it’s these little gems that make cinema so interesting and surprising.

Treacle Jr. tells the story of Tom (Tom Fisher) who suddenly decides to leave his family, his job and his town to go to London. He gets rid of everything except his empty wallet, a picture of his wife and kid and some cash. The first few minutes depict his silent wanderings through town. After an unfortunate collision with a tree that leads him to the emergency room, he meets Aidan (Aidan Gillen). Aidan is… special. He’s always smiling, he speaks like a duck and he’s simple like a child and now he’s clinging to Tom. But Aidan is also extremely kind, helpful and funny and his optimism and happiness are highly contagious. I couldn’t help smiling stupidly and laughing about the simplest things. Like the way Aidan introduces Tom: « He’s Tom, he’s a vegetarian and he doesn’t believe in Heaven. » Actually Tom is sad, without money and living in the street but that’s how Aidan defines him. Oh and he has a knack for thinking of the most improbable jobs to earn money. Like trimming bushes with a small pair of scissors!

The movie has its moments of joy but also of sadness. Aidan is the kind of person that typically makes us uncomfortable because he’s unpredictable, he doesn’t restrain himself and he speaks his mind all the time. We’ll probably get rid of him by saying something nice, smiling from the corner of our mouthes or simply by ignoring him. But sometimes, someone reacts differently. Things get violent because the Aidans of the world are stupid and slow and different and easy targets, right? That happens a lot in the movie. Even the so-called girlfriend is abusing him verbally and physically. The whole situation made me feel really uncomfortable because it feels so true to reality. And poor Aidan keeps smiling. It broke my heart every time.
There’s something else that feels unpleasantly real in the movie. In the beginning, Tom has money so he’s not completely desperate. Then he loses the money and this character we know to be a good guy has to beg for money on the street. And we all know how it works. We don’t look at the guy begging for money, we avoid him; we never have money, not for him. Except here, we know Tom and it seriously gets you thinking of your own attitude toward the poor or eccentric guy on the street. What do we know of their history after all? Why don’t we react for once? That’s exactly what Tom is going to do in the end: take action, at last. He knows the girlfriend is using Aidan, he knows she’s not faithful, and he’s sad about it but has kept himself from saying anything. Until he can’t do it any longer because Aidan has grown on him (and on the audience). The movie is full of powerful and emotional moments and I must admit, even knowing how it would end, I was in tears.

As I’ve said, it’s a small budget movie (if you watch the extras on the DVD, you’ll see how small budget it was) but the story is strong and makes you forget about everything else. Tom Fisher’s beautiful sad blue eyes are saying so much more than his lines and Aidan Gillen… Wow! I’m becoming quite familiar with his work and, still, he continues to amaze me every time I see him in a new role. This one is no different, as crazy and funny as it is, and is maybe one of his best performances so far. He’s a chameleon actor and he proves it once again.

I feared a few times that the movie was going to take the easy way out and be disappointing but it didn’t happen. I was left in tears and satisfied. And it made me think which is always a good thing. The DVD is in English only without subtitles (I’m saying this for my French followers who might read this review), apparently it’s more or less only available in the UK or online. But if you have the opportunity to watch it, go for it!

By the way, Treacle Jr. refers to a kitten :)

Many thanks to Claire for her time and her good advices :)